Meint Smit was awarded the IEEE John Tyndall Award for 2022

He is an icon in the field of integrated photonics and the founding father of JePPIX. But above all, Meint Smit is a visionary, who recognized early on that the route to success with photonic chips lays in the development of standard building blocks that can be used by anyone; developers, researchers or companies.

The John Tyndall Award is presented annually to a single individual who has made outstanding contributions in any area of optical-fiber technology, including optical fibers themselves, the optical components used in fiber systems, as well as transmission systems and networks using fibers. The contributions which the award recognizes should have met the test of time and should have been of proven benefit to science, technology, or society. The contributions may be experimental or theoretical.  Established in 1987, this award is jointly sponsored by the IEEE Photonics Society and Optica and consists of a specially commissioned Steuben crystal sculpture, a scroll, and an honorarium. The presentation is made the following year at the Optical Fiber Communication Conference (OFC). 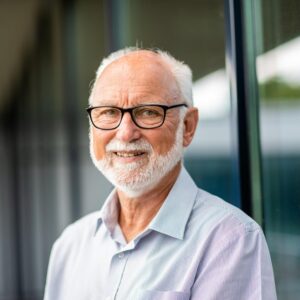 He started his research in photonic integration in 1981, invented the Arrayed Waveguide Grating and was closely involved in the introduction of MMI-couplers, key components in Photonic ICs. Having founded the JePPIX platform, he is highly involved in the development of the InP-based photonic foundry system in Europe. Smit is an IEEE Fellow and has received an ERC Advanced Grant, a LEOS Technical Achievement Award, and a Rank Prize for Optoelectronics. He received the John Tyndall Award for leadership in building a photonic integration ecosystem, and pioneering contributions to key photonic devices including the arrayed waveguide grating.

Read more on the research of Meint Smit in the interview ‘How pioneering a blueprint for chips made Eindhoven a leader in photonics’. Photonic integration researchers Meint Smit and Weiming Yao talk about the challenges, the future and Eindhoven’s success in photonics.